One of our biggest splurges was to see FC Barcelona play Real Sociedad in Camp Nou Stadium in the final game of the 2017-2018 season.  This was such a huge game not so far as the standings go, as FC Barcelona had long locked up the championship but because this was beloved midfielder Andres Iniesta (2002–2018) last game playing for Barcelona.  Considered a homegrown player Iniesta came through La Masia, the Barcelona youth academy, after an early migration from his birthplace, and impressed from an early age.  In addition to that, the chance to see Lionel Messi( perhaps the greatest current player ) play was one we couldn’t pass up. 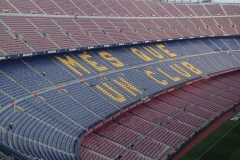 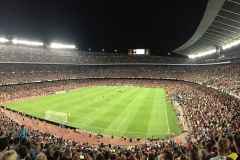 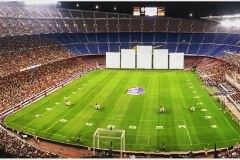 Camp Nou is the home stadium of FC Barcelona since its completion in 1957. With a seating capacity of 99,354, it is the largest stadium in Spain and Europe, and the third largest football stadium in the world in capacity.

How to get tickets

We lucked out even getting to see a game and hit the jackpot because it was such a meaningful one.  Months out I started looking for tickets with only single games tickets available I started to panic.  Should I buy to separate tickets?  Should I wait?  The answer is to wait.  All the tickets to FB Barcelona games are held by season ticket holders and the closer to the game date the more tickets become available.  We bought our tickets a week before the game and there were a lot of tickets available.