Casa Batllo is high on the list of Best things to do in Barcelona. It’s a Modernisme or Art Nouveau building in the center of Barcelona.  It was designed by Antoni Gaudí and is considered one of his great masterpieces. A remodel of a previously built house, it was redesigned in 1904 by Gaudí.  The local name for this building is Casa dels ossos (House of Bones), as it has skeletal quality.  It is located in the middle of Passeig de Gracia, which in the early 20th century was known as a very prestigious and fashionable area. 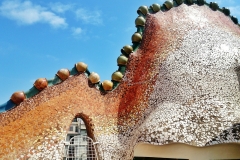 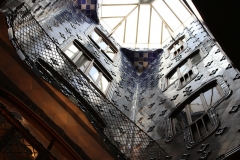 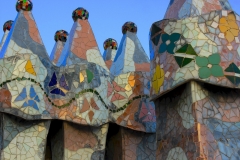 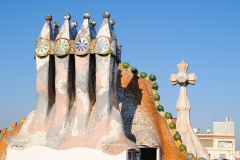 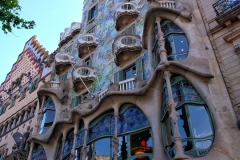 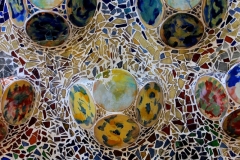 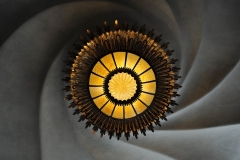 The facade ofCasa Batllo, whose fantastical style clearly shows the imagination of its architect, is made from a combination of stone and colored glass, with undulating shapes reminiscent of nature.  The first impression that it leaves is one that will stay with you long after you leave.  The dramatic bone-like structure of the facade makes an excellent first impression.  While you wait in line your imagination goes wild thinking of how one comes up with such designs and yearning to peek inside.

If the facade is the wrapping paper the rooms inside are surely the present.  Each one taking inspiration from nature and at times you can see exactly which animal or plant is intended.  The spiraling staircase carved elements resembling a prehistoric animal’s vertebrae, perhaps that of the dragon.  Stain glass skylights that resemble turtles.  Ceilings and lights that extend the room in the spiraling around like a seashell.  In the middle part of the building, there is a courtyard called Patio de Luces (the Court of Lights), which served both as a source of light and ventilation. It is entirely covered with a blue and white ceramics, giving the impression of being in an underwater cave.

The roof of Casa Batllo is a work of art on its own but on this tour, it truly is the bow on top.  With 27 chimneys that are organized into four sets, each measuring 10 meters high and resembling mushrooms.  At the front of the building the continuation of the dragon back first seen at the bottom of the stairs.  Gaudi unique style makes this masterpiece a must visit on any trip to Barcelona.
We booked the first available time slot for a normal ticket (9 am) and arrived 15 mins early.  We were about 20th inline.

If you have a tip, question or suggestion please add a comment below.  Stay Active.